Now for something completely different… 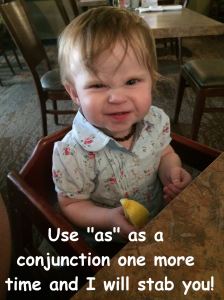 Mention “rules” to a writer and one of two reactions generally occur. Either the writer’s eyes light up with plaintive hopefulness that finally they are about to hear the One Great Secret that will make writing easy. Or, the writer responds like a cornered wolf ready to rip your face off.

Despite that, I am bravely putting on my editor hat and we’re going to discuss some rules for writing. (No face-ripping, please.)

RULES. I have only one hard and fast rule for writing: Don’t bore the reader. As long as you are engaging the reader, then your writing is working.

What about “good” writing and “bad” writing? The written word is a form of communication. If it communicates to a reader what the writer means to say, then it’s good writing. If it fails to communicate, then it’s bad. Any other criteria for judgement is entirely subjective and a matter of taste.

That said, there are a few “rules” every writer should know. Only let’s not call them “rules.” “Rules” seem to run counter to creativity (which I could argue exhaustively, but some other time), plus sometimes open me up to face-ripping, so to make this more palatable, let’s call them “Tools” instead.

TOOLS EVERY WRITER SHOULD MASTER

When I say “master” that’s precisely what I mean. You practice and learn and pound the principles into your noggin until you know them inside and out. Unless and until you have mastery of those four tools you are no more a professional writer than a guy who can’t tell the difference between oak and pine is a professional carpenter.

A lack of mastery of those tools tags you as an amateur, but mastery will not necessarily make you a great storyteller. Once spelling, grammar, punctuation, and form and structure are second nature to you, however, you will be ready to use the most powerful tool of all:

Storytelling is much like a magic show. The magician dazzles with misdirection, sleight of hand, patter and showmanship. Those skills allow the magician to control the audience and keep their attention focused right where the magician wants it. The writer does the same thing. Great writers understand and exploit readers’ willingness to suspend disbelief and ability to enlarge the characters and stories in their imaginations. Less-than-great writers don’t trust the readers to “get it” and don’t trust in the power of their own words. They try to do the reader’s job, and in doing so, their prose is boring.

Example: A door and a dog.

Now “dog” is a wonderfully evocative word and just about everyone knows what a dog is, and in many cases all you need to say is “dog” and the readers know what you’re talking about. But you want to paint a picture. You want to tell a story.

I saw a big, black, shaggy dog in the yard. He guarded the door. He was scary. He stood 28 inches at the shoulder, and his head was square, and his fur looked rough, like nobody ever brushed him or petted him or called him, “Good boy.” A dog bit me once, when I was seven years old, and the scar is faded, but I still remember the incident vividly. The real scar is on my soul. My heart started pounding and my palms grew sweaty. I was terrified. The dog turned his head. His eyes were yellow. They were filled with hate and viciousness. I thought about running and thought about the dog catching me if I did run.

Technically, there is nothing wrong with the above paragraph. The problem is that it’s static in that it leaves nothing for the reader to do but watch. (The writer already filled in all the details and told the reader how to think and feel about it.) It also defuses the tension by burying the real problem. It’s overloaded with information that all sounds important. But what is the reader supposed to worry about? The mean, but unloved dog? The narrator’s boyhood trauma? Dog bites? When everything is important, then nothing is important. There is no suspense.

A writer who trusts his prose and the reader will keep the focus where it belongs.

She was inside and I was outside. All that separated us was a door. And a dog. Right now that dog glared at me as if it owed me money and I’d come to collect.

As a writer I trust the reader to fill in the blanks about mean, scary dogs and their own childhood traumas, while focusing on the narrator’s real problem about how to get to the desired prize on the other side of the door.

The right details build a word world for the reader to inhabit. Too many extraneous details turns into reportage, fact after fact after fact with no indication as to what is important and what’s not, leaving the poor reader with no room for his imagination to work.

When I’m editing, along with clarity and consistency, I’m looking for any place where the writer is interfering with the reader. Most writers, in my experience, can’t see how powerful, how good, their stories are, and so they tend to pile on the words to make sure the readers really and truly get it. Cutting the extraneous words is the cure. Here is my list of the major offenders:

There are other ways writers get in the way of their own stories and interfere with the reader’s enjoyment. Covering them all would take a book. But if you start with these, I guarantee your writing will improve and you’ll get rid of much of the fluff and filler bogging down your story.

14 thoughts on “The RULES of Writing and Other Nonsense”

Ebooks ARE real books. Show respect, show the love. Communication, Information, education, entertainment--Ebooks have it all.

Stuff I’m Nattering On About

An essential resource for serious writers.

All you need to know to take your formatting skills to the next level.

Manage your front matter, back matter, ToC, metadata and more.

Must Have for Self-Publishers

How to get noticed and sell more books.

Stuff In the Filing Cabinets